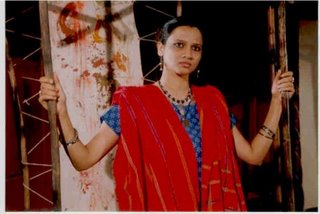 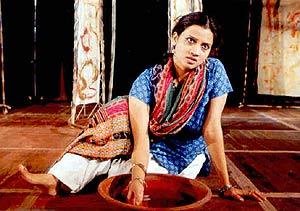 Madhavi
A story based on a character older than 5000 years and still alive...only the names have changed from Madhavi to Mansi or Mona...
Madhavi is not a myth, she is a reality. Madhavi has not been vanquished by history, sadly like the legend of Gaea, she still lives either in the self-imposed glory of her sacrifice or the heart-rending solitude of her abandonment...

Critics' remarks
Even though the play is based on mythology, Madhavi .It was a delightful solo performance by Rashi Bunny, as is contemporary in its
presentation and style... .
-India Today
All women will be able to see a part of themselves in it.The relevance of the issue makes the time setting immaterial.
-Indian Express
Its 'an actor's play'…The Kathavachan style has been adopted and the actor Rashi relates to the audience in day to day baat cheet…an intense and intimate theatre experience.
The Pioneer
The solo performance is an experiment…Its like taking people through a journey…Even the set design is very experimental. There are blank canvasses on the stage and different colours placed in earthen pots, that symbolize the different colours of life…
-First City
It was a delightful solo performance by Rashi Bunny, as she brought to fore a range of human emotions in 'Bhishma Sahni's MADHAVI...
it is an experiment both in its presentation by the director Arvind Gaur and its enactment by the actor Rashi…the Set and its use to my mind is indeed creative bordering on the genius.
-The Hindu
The complex story of Madhavi, her trauma, tragedy and conflicts were portrayed with great sensitivity by Rashi Bunny... The simplicity of set design, use of bamboo structures, canvasses & helped audiences to extend their imagination to grasp the diversity and multi dimensional directorial interpretation of the play.
-Nav Bharat Times
The play was among the very rare meaningful theatre we get to watch in our city. Thought provoking, overwhelming, it left so many fighting their tears. Each person present would have identified with the double standards of our society, each person sitting there would have felt guilty of having reduced the existence of a woman to a mere object, a commodity. Each woman would have relived some part of her life.
-Hindustan Times

Arvind Gaur heads the Delhi based theatre group Asmita and is committed to innovative and socially relevant theatre. He has directed over 50 plays that have been staged at Edinburg Theatre festival in the UK and at Chicago, Washington, Boston, San Fransisco, Ohio in the US. His play Madhavi received special award last year for best play in experimentation with tradition at international Solo festival, Armenia. Madhavi was staged in the International theatre festival at Russia last winter and was performed in Lyon International Theatre festival, France last week.

Rashi Bunny- Her Solo Hidden Fires directed by Arvind Gaur was invited for Queen's Award Project (UK) for Ciommunal harmony. She was associated briefly with the Living Theatre Academy under Ebrahim Alkazi. Rashi further pusued training in Theatre Arts and Design at the University of Alabama and Rutgers University, New Jersey USA. She is recipient of Ruby Llyod Artistic and Academic Excellence Award and Best International Student Scholarship Award in the USA. She was selected as one of the 50 Icons: Emerging personality of India in 2005 by Sahara group
Posted by Asmita Theatre Group at 9:59 AM