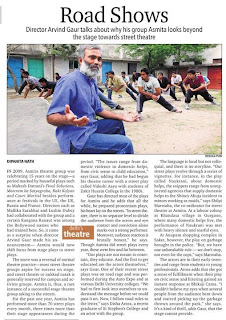 The play focuses on the need for basic civic sense in our country.
Civic sense is nothing but social ethics. It is belief in hygiene, respect for other members of society, and human behaviour. It is consideration by the people for the unspoken norms of society. A lot of people assume that civic sense is just about keeping the roads, streets and public property clean. But civic sense is more than that; it has to do with law-abiding, respect for fellow men and maintaining decorum in public places.

Civic sense, or rather the lack of it, is a topic that has been widely discussed and argued in India. Somehow, most Indians do not care much for civic sense. And this attitude is prevalent across all sections of society. We people today are so driven towards our personal goals that civic sense as an ethic has become a low priority, almost a nuisance for us. We don’t realise that this sort of attitude is not going to harm anyone else but “US” only. Civic sense has dropped to an all-time low in recent years, as is rather obvious from the current state of society.

Being inconsiderate towards fellow society members will only come right back at us. We have to be social, mature and unbiased when it comes to situations in public. The current state of public transport, for example, is disheartening. And we have no one to blame but “ourselves” for this condition. There are spit marks, urine, vulgar graffiti, random garbage and overflowing sewers at every nook and corner of India. NO city in this country has managed to fight the menace. It is easy to pin everything on the government, but people must first question themselves and their own civic sense. Roads are not dirty because nobody cleaned it, but because somebody dirtied it in the first place.

Using 'everybody does it' and ‘what difference can I alone make’ is an excuse and only an excuse. The action has to start from US only. If every individual does his or her own bit, he or she can definitely make a huge difference and can lead to change. India has really diverse people and the need of the hour is general civic sense.

About- DOR- Duties Over Rights
a group of students and young professionals who believe in our responsibilities as citizens of the nation. We believe that together, we can be a part of the change that we want to see. Our mission is to instill a better moral and civic sense in the minds of our people, to be able to emerge as a united society working towards the good of the nation.

Keeping the forthcoming Commonwealth Games in mind, our first project is ‘United for Commonwealth’ which will focus on the cleanliness of the state through which we aspire to achieve our stated mission. We endeavor to do this by involving maximum participation with the cooperation of individuals and the support of government authorities and other private institutions.
Posted by Asmita Theatre Group at 11:10 AM