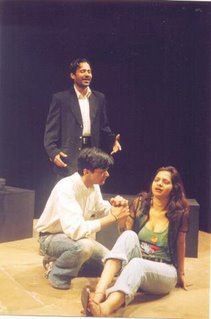 About Translator
Smita Nirula has been involved with theatre
since her college days. She has a Master’s degree in theatre
from the State University of New York at Stony Brook, USA and a
Bachelor’s degree in theatre and journalism from McPherson
College, Kansas, USA.
She has been a theatre critic for the Indian Express,
The Hindu and the Pioneer newspapers over the last 15 years.
She has written extensively on theatre for various websites
including ICICI’s Café Dilli. She has worked in numerous
productions both onstage and offstage(light design, set design,
stage management) in India and America.
She has written plays which have been produced and published.
Currently she is busy translating some of Mahesh Dattani’s plays
(including Dance Like A Man and Seven Steps Around The Fire)
from English into Hindustani, and studying Vedanta.
Posted by Asmita Theatre Group at 11:38 PM No comments: