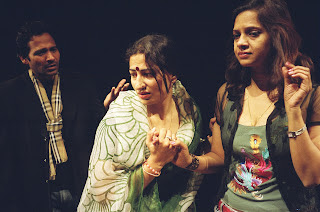 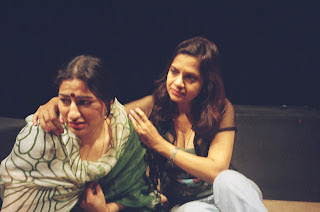 Directed by Arvind Gaur
Translation in Hindi By Smita Nirula
27th October,7pm
Shri Ram Centre, Mandi House,New Delhi
Contact-9899650509
About the play
A play about love and betrayal, 'Thirty Days' treats the sensitive and generally taboo issue of child sexual abuse. 'Thirty Days' endeavors to lift the veil of silence which surrounds child sexual abuse and addresses the issue unflinchingly.It builds on the trauma of Mala who lives with the haunting memories of her abused past.
Her abuser - her uncle “ subconsciously lives with her all the time, as part of her dirty reflections. He damages her natural growth, deters her from pursuing her love interests beyond the ominous 30-day period and scars her soul every now and then. As Mala withers under the psychological pressure extorted on her by the abuser, her mother watches silently, living her own pain - suffering mutely.
Exploring the painful problem, Mahesh Dattani raises valid concerns and structures a world of optimism where the wrongs can stand corrected and resurrection of brutalized faith is possible. But none of this happens without another man's willingness to help the two women bury their traumatic past and find ways of rejuvenating their present. Deepak, Mala's boyfriend, becomes the agent of change here. He dares to unmask the evil, even at the cost of his love.
He hits the women hard until they hit the rock bottom. Finally, there is no way but to come up - face the wrongs and dare to correct them, notwithstanding the challenges the process of correction entails. By marking a daring departure from norm, the play ensures that we, as a society, no longer take comfort in the routine of uttering word "incest" in gutless undertones.The play also brings us closer to the reality of abused children -pleasure does form a part of their pain, but finally the consequence of dangerous games can only be dangerous. Our only way to fight danger is to recognize it and crush with generous doses of brutality lest we are ready to condemn innocence to lifelong death.
Arivnd Gaur's "30 Days in September" is worth watching. Mahesh Dattani builds his play around child abuse and tries to lift the veil on the hush-hush subject…..Lifting the veil ....ROMESH CHANDER, The Hindu
About Translator
Smita Nirula has been involved with theatre since her college days. She has a Master's degree in theatre from the State University of New York at Stony Brook, USA and a Bachelor's degree in theatre and journalism from McPherson College, Kansas, USA.She has been a theatre critic for the Indian Express,The Hindu and the Pioneer newspapers over the last 15 years. She has written extensively on theatre for various websites including ICICI's CafÃ© Dilli. She has worked in numerous productions both onstage and offstage(light design, set design, stage management) in India and America.
She has written plays which have been produced and published. Currently she is busy translating some of Mahesh Dattani's plays (including Dance Like A Man and Seven Steps Around The Fire) from English into Hindustani, and studying Vedanta.
About Mahesh Dattani
Mahesh Dattani, born in Bangalore on 7 August 1958, studied in Baldwin’s High School and St. Joseph’s College of Arts and Science, Bangalore.He has worked as a copywriter in an advertising firm and subsequently with his father in the family business. His theatre group Playpen was formed in 1984, and he has directed several plays for them, ranging from classical Greek to contemporary works.
In 1986, he wrote his first full-length play, Where There’s a Will, and from 1995, he has been workingfull-time in theatre. His major plays are Dance Like a Man, 30 Days in September, Bravely Fought theQueen,Final Solutions,Tara, On a Muggy Night in Mumbai.Dattani is also a film-maker and his films have been screened in India and abroad to critical and public acclaim.
His film Dance Like a Man has won the award for the Best Picture in English awarded by the National Panorama.In 1998, Dattani won the Sahitya Akademi award for his book of plays Final Solutions and Other Plays, published by East–West Books Chennai, thus becoming the first English language playwright to win the award.
Dattani teaches theatre courses at the summer sessions programme of Portland State University, Oregon, USA, and conducts workshops regularly at his studio and elsewhere. He also writes plays for BBC Radio 4.
‘[Dattani’s work] probes tangled attitudes in contemporary India towards communal differences, consumerism and gender… a brilliant contribution to Indian drama in English.’—Sahitya Akademi award citation

Spl. thanks to Dr. Manoj Kumar
Posted by Asmita Theatre Group at 4:02 AM No comments: