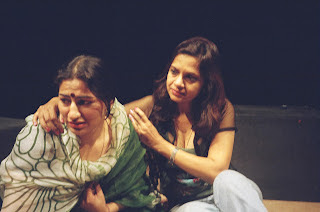 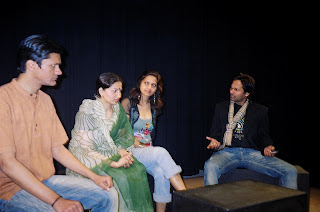 Posted by Asmita Theatre Group at 3:05 AM No comments: 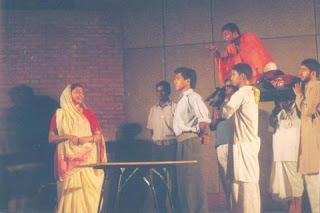 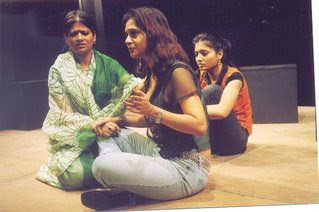 Mote Ram ka Satyagrah
The play is a comic-satire with all the elements of a musical. on the surface, the play appears to be a simple story about a brahmin from banaras. The town of banaras adorns itself to recieve a Vice Roy, as per the directions given by the Magistrate- Sir William Parkinson. Pandit Moteram Shastri, the protagonist seems to have bitten more than he can chew, and agrees to go on a hunger strike to stop the people of the town from declaring a "Hartal". Whether or not the pundit succeeds in controling his hunger brings the play to its comical climax. There is more to this play then meets the eye. It deals with larger issues of the relationship between Religion & Politics. The play wright, intriciately weave the threats of this rather sensitive subject into a cohesive and entertaining play. The issues raised are as relevent and contemprary now, as they were under the colomset's rule.
Accidental Death of an anarchist
(Operation Three Star)
Grounded in a very specific, disturbing politicl reality the Operation Three Star offers a scathing comment the real events which are criminal and obscene in their brutality:Crimes of the state.With his seemingly insane logic the maniac is instumental in unmasking the criminal folly of the law enforcing agency in its attempts to cover up heinous action. He persistently ridicules the policie's shaky case and forces them to re-enact the situation in that led to the 'suicide' of a 'terrorist' under their custody. Subsequently, they contradict themselves to dismentle the whole issue of half-truths and non-sequiturs. An escalating series of impersonations and misunderstandings extend a particular viewpoint. The jerk from comic gags to a fuller awareness of serious issue becomes a potent device as the crude voilence of the power-that-be is recognised.
30 DAYS IN SEPTEMBER
A play about love and betrayal, 'Thirty Days' treats the sensitive and generally taboo issue of child sexual abuse. 'Thirty Days' endeavors to lift the veil of silence which surrounds child sexual abuse and addresses the issue unflinchingly. it builds on the trauma of Mala who lives with the haunting memories of her abused past. Her abuser - her uncle - subconsciously lives with her all the time, as part of her dirty reflections. He damages her natural growth, deters her from pursuing her love interests beyond the ominous 30-day period and scars her soul every now and then. As Mala withers under the psychological pressure exterted on her by the abuser, her mother watches silently, living her own pain - suffering mutely. Exploring the painful problem, Mahesh dattani Dattani raises valid concerns and structures a world of optimism where the wrongs can stand corrected and resurrection of brutalised faith is possible. But none of this happens without another man’s willingness to help the two women bury their traumatic past and find ways of rejuvenating their present. Deepak , Mala’s boyfriend, becomes the agent of change here. He dares to unmask the evil, even at the cost of his love. He hits the women hard until they hit the rock bottom. Finally, there is no way but to come up - face the wrongs and dare to correct them, notwithstanding the challenges the process of correction entails. By marking a daring departure from norm, the play ensures that we, as a society, no longer take comfort in the routine of uttering word “incest” in gutless undertones. The play also brings us closer to the reality of abused children -pleasure does form a part of their pain, but finally the consequence of dangerous games can only be dangerous. Our only way to fight danger is to recognise it and crush with generous doses of brutality lest we are ready to condemn innocence to lifelong death.


Posted by Asmita Theatre Group at 2:20 AM No comments:

ABOUT THE PLAY - COURT-MARTIAL
When respect is denied to a man for the only reason that he is borne by ‘low-caste’ parents, the offence cannot simply be termed as a social violence. It assumes larger proportions of crime against humanity and society at large.Yet by the turn in situation the murderer becomes a winner whereas the victim is unforgiven.
The culprit may receive severe punishment at the hands of the law but, in fact, it is the society which is put in the docks.Court Martial,written by Swadesh Deepak, is a story of recruit Ram Chander who is tried for murdering one of his officers and injuring another.
The Court Martial is presided by a war veteran.Col. Surat Singh who has witnessed many ‘life –and –death’ situation. But this trial puts him in a queer position, so far unknown to him, and during the course of interrogation he realize that the issues at stake are much larger than what meets the eye.
Realizing that the Indian Army is the only government agency in which reservation on caste basis is not permissible. Court Martial presents a combination of legal and poetic justice.

CRITICS SAYS
Tight pace of Court Martial….not to be missed .
- Kavita Nagpal (Hindustan Times)
Gaur’s hard hitting realism…..His infinitely intelligent approach….strong play.
- Aruna Ahluwalia (E.News)
Kudos to Court Martial….a drama that went beyond the limits of drama .
- (Indian Express)
The Asmita team has created a marvelous piece of theatre out of a wonderful script….don’t miss it. The times spent watching it is well worth it.
-Smita Nirula ( The Pioneer)
Stealing scenes with revolt as the theme ….Court Martial was an engrossing display of theatre for social awareness.
-Sushama Chadha (Times Of India)
Excellent acting, live and memorable…..worth visit.
-Ajeet Rai (Nav Bharat Times)