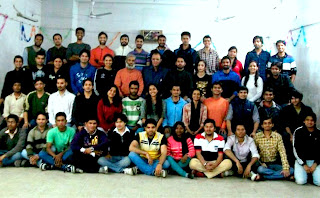 About the play
'Ek Mamooli Aadmi' underlines those features of an urban middle class setting which make the yearning for real happiness an agonizing experience. The play also accentuates the contours of a system in which even biological relations are bound to breed loneliness and family becomes fatal to an individual.
Ishwar Chand Awasthi, the protagonist, is to die soon and this fact makes him realise that it was not life that he led so far, it was death, unnoticed and unannounced. The perception of this death animates him and he turns to be the source of others' happiness- an extraordinary asset to life and society.
______________________________

About the play
When respect is denied to a man for the only reason that he is borne by 'low-caste' parents, the offence cannot simply be termed as a social violence. It assumes larger proportions of crime against humanity and society at large. Yet by the turn in situation the murderer becomes a win...ner whereas the victim is unforgiving.The culprit may receive severe punishment at the hands of the law but, in fact, it is the society which is put in the docks. Court Martial, written by Swadesh Deepak, is a story of recruit Ram Chander who is tried for murdering one of his officers and injuring another.
The Court Martial is presided by a war veteran. Col Surat Singh who has witnessed many 'life –and –death' situation. But this trial puts him in a queer position, so far unknown to him, and during the course of interrogation he realize that the issues at stake are much larger than what meets the eye. Realizing that the Indian army is the only government agency in which reservation on caste basis is not permissible. Court Martial presents a combination of legal and poetic justice.
_________________________________________________________

About The Play-
Grounded in a very specific, disturbing political reality the Operation Three Star (Adaptaion of Dario Fo's Accidental Death of an Anarchist ) offers a scathing comment the real events which are criminal and obscene in their brutality: Crimes of the state .
With his seemingly insane logic the maniac is instrumental in unmasking the criminal folly of the law enforcing agency in its attempts to cover up heinous action. He persistently ridicules the police's shaky case and forces them to re-enact the situation in that led to the 'suicide' of a 'terrorist' under their custody.
Subsequently, they contradict themselves to dismantle the whole issue of half-truths and non-sequiturs. An escalating series of impersonations and misunderstandings extend a particular viewpoint.
The jerk from comic gags to a fuller awareness of serious issue becomes a potent device as the crude violence of the power-that-be is recognized.
________________________________________________________

About The Play-
Unsuni is a socially relevant and politically deep script by Mallika Sarabhai, based on the Novel "Unheard Voices" by Harsh Mander. In a Society where the success of a handful makes bigger news than the misery of millions, a s...et of 5 monologues dares to speak out for the mute, the desolate, the chronically ignored... a woefully unloved India, full of People but starved of life.Unsuni lifts the veil around harsh realities faced by the diversity afflicted people of our country. Street urchins abandoned by society to fend for themselves in the face of adversity; tribal people forced to surrender their honour to repacious land grabbers; scavengers and lepers who have never known the meaning of human dignity are some specific problems addressed by the play. The volatile nature of religious politics coupled with an incompetent judicial structure is also portrayed with grave honesty.
In the depiction of all these causes is a common underlying plea for us to open our eyes to the bigger picture, to share that human worth which we for ourselves claim as a right, but deprive others of without justification.The play overall is an intense reminder of horrors towards which we voluntarily turn a deaf ear. It does not aim to downplay the success of those who do make it to the top, but is a call to the privileged to consider those who deserve equal rights, but lack equal opportunity
_______________________________________________________

About play Ramkali-
It raises core issues facing today’s world, of greed versus common good, of the value of right and wrong, of the pressures society puts on people which drive them to committing wrongs to keep up with expectations, the exploitation of goodness and of good people by an aspiring society, and the question of equating theft and wrong doing out of need with that done out of greed. Brecht used theatre to raise issues, as does Darpana and Asmita Theatre Group, Arvind Gaur’s company based in Delhi. Brecht, like Arvind Gaur and Mallika Sarabhai, believed in entertaining people with theatrics and songs to keep them engaged but watchful, planting seeds of doubt to shake complacency.
It is said that between the battle of wrong and right, it is truth that wins, yet ladies and gentlemen, the truth in this play is yet to be discovered… so if you think it has been some time since you’ve done a good deed, think again… maybe not. May be we all have been Ramkali, doing “the right thing’ in the wrong place or vice versa ! Still having second thoughts? - To those born later You who will emerge from the flood Which we have gone under. Remember When you speak of our failings The dark time too Which you have escaped. For we went, changing countries oftener than our shoes Through the wars of the classes, despairing When there was injustice only, and no rebellion. Think of us… - Brecht
__________________________________________________________

About The Play:
The play explores facts of the gulf crisis and the US intervention which has been questioned by the civilized world time and again. The play is expected to attract the elite audience which is interested in global issues like this one. It explores emotions, talks about world peace and political orders of the day effect the common man. For More Information Visit http://thelastsalute.com/
--------------------------------------
9th July, 7:00pm Sri Ram Centre,
Mahesh Dattani's "FINAL SOLUTION"
Translated by Shahid Anwar
andi House,New Delhi

About the Play
"Final Solutions" has a powerful contemporary resonance as it addresses as issue of utmost concern to our society, i.e. the issue of communalism. The play presents different shades of the communalist attitude prevalent among Hindus and Muslims in its attempt to underline the stereotypes and clichés influencing the collective sensibility of one community against another.
What distinguishes this work from other plays written on the subject is that it is neither sentimental in its appeal nor simplified in its approach. It advances the objective candour or a social scientist while presenting a mosaic of diverse attitudes towards religious identity that often plunges the country into inhuman strife. Yet the issue is not moralised, as the demons of communal hatred are located not out on the street but deep within us.
The play moves from the partition to the present day communal riots. It probes into the religious bigotry by examining the attitudes of three generations of a middle-class Gujrati business family, Hardika, the grandmother, is obsessed with her father's murder during the partition turmoil and the betrayal by a Muslim friend, Zarine. Her son, Ramnik Gandhi, is haunted by the knowledge his fortunes were founded on a shop of Zarine's father, which was burnt down by his kinsmen. Hardika's daughter-in-law, Aruna, lives by the strict code of the Hindu Samskar and the granddaughter, Smita, cannot allow herself a relationship with a Muslim boy.
The pulls and counter-pulls of the family are exposed when two Muslim boys, Babban and Javed, seek shelter in their house on being chased by a baying Hindu mob. Babban is a moderate while Javed is an aggressive youth. After a nightlong exchange of judgements and retorts between the characters, tolerance and forgetfulness emerge as the only possible solution of the crisis. Thus, the play becomes a timely reminder of the conflicts raging not only in India but in other parts of the world.
_______________________________________________________

ANDHI AND AMBEDKAR – REVIEWS
“Ambedkar aur Gandhi” is one of Asmita’s classics…Asmita’s latest
presentation, young playwright Rajesh Kumar’s “Ambedkar aur Gandhi”
was marked for healthy audience response both for its content and the
director Gaur’s overall production design… Never before have I seen
such an intelligent post-presentation discussion between the audience
and the director. It just goes to show if the theme is relevant and
the presentation professionally good, the audience is waiting for
it...
The cast does full justice to the playwright and were true to what the
director was trying to get out of them.
Bajrang Bali Singh playing Ambedkar was excellent particularly in his
last speech after Gandhiji’s death.Viren Basoya’s Gandhi, calm and
collected throughout and yet emotional when he says he wants to be
reborn as a Harijan. In response, the audience breaks out in a
non-stop applause.
Apart from the two lead players, others who stand out are Shilpi
Marwah as Rama Bai, Pankaj Raj Yadav as Devdas Gandhi, Malay Garg as
Kedarkar, Raj Sharma as Sadanand and Rahul Datta as Sardar Patel.
To lend colour to the presentation, there was, as usual, excellent
music by Sangeeta Gaur and some popular songs that brought back old
memories.
“Ambedkar aur Gandhi”, to my mind is one of Asmita’s classics and
Gaur’s best-directed presentations that must be taken around the Hindi
speaking States...
-ROMESH CHANDER, The Hindu (An ongoing dialogue, 21 August, 2009)
http://beta.thehindu.com/arts/theatre/article6277.ece

Politics takes centre stage...social political play about the
geopolitical and social scenario in the country in 1930’s…reveals the
two extreme thinking- Gandhi and Ambedkar …relation between the two
despite their differences.
- Hindustan Times (Live correspondent)

Arvind Gaur’s 64th endeavour follows its predecessors- a social and
political play… political dialogues on the social concerns of the
time… antithetical views and the realisation that Gandhi Ambedkar’s
vision was one, but means different — form the fabric of the
play…issue of untouchability and the plight of the Dalits is a
significant thread expressed in the play……..
- The Hindu (Preview) 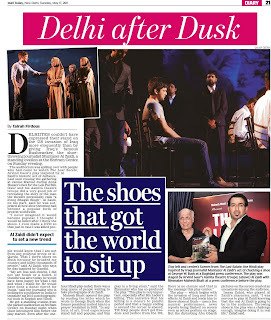 Mahesh Bhatt's "THE LAST SALUTE"
directed by Arvind Gaur
on 29th May 2011, 7:00pm
at G.D Birla Sabhagar, Kolkatta, India,
Play Based on Muntadhar al-Zaidi's Book "The Last Salute To President Bush",
Playwrite: Rajesh Kumar,
Starring: Imran Zahid.
Music: Dr. Sangeeta Gaur.
Photos by: Manoj Rai
The play explores facts of the gulf crisis and the US intervention which has been questioned by the civilized world time and again. The play is expected to attract the elite audience which is interested in global issues like this one. It explores emotions, talks about world peace and political orders of the day effect the common man.
For More Information Visit http://thelastsalute.com/
Posted by Asmita Theatre Group at 9:24 PM No comments: