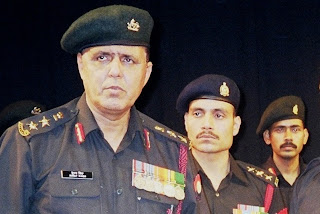 "Not Just a Play: ‘Court Martial’ is not just a play written by Swadesh Deepak, directed by Arvind Gaur & enacted by Asmita-artistes. It is a burning truth of the Indian Society. Sensing that Indian Army is the only government institution, which does not permit caste-based reservations, ‘Court Martial’ presents a mixture of natural and legal justice, which is not only the truth of the Indian Army, but that of the whole Indian Society. That, despite all his qualifications, an individual is traumatised because of his low-caste origins is not merely social violence, but a crime against humanity. The monotony of the long court-trial was pre-empted by the seasoned performance of the Asmita artistes. This Asmita-presentation has proved to be a soothing experience, after many years, for Swadesh Deepak who created a countrywide flutter through this play. " Excellent acting, live and memorable…..worth visit. - Ajeet Rai (Nav Bharat Times)
Posted by Asmita Theatre Group at 4:20 PM No comments: 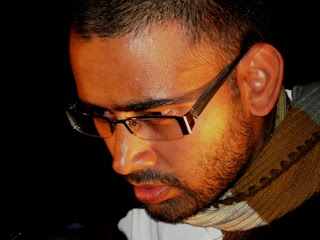 in Ek Mamooli Aadmi directed by Arvind Gaur
Sixty-three artistes. Five plays. Four directors. Quite possibly the largest theatre event in the Capital this fall, and the most benevolent. Who’s Life Is It Anyway, a drama festival held in the city every year, begins today. The event is hosted by Hungry Heart, an NGO founded by renowned
theatrists Sohaila Kapur, Smita Bharti and Monica Bhasin. This year, the foundation hopes to aid another NGO, HelpAge India, in raising funds for victims affected by the flash floods in Leh. “They need our help and attention,” reiterates Arvind Gaur, director of the play, Ek Mamooli Aadmi. “So, the proceeds from the show will go towards their rehabilitation.”
The theatre festival will showcase the works of some of the most respected names in the field of theatre, and more. “It is not only aimed at promoting theatre, but also filmmaking and the visual arts, thus empowering creative professionals to turn their visions into reality,” says Smita Bharti, one of the organisers.
And the acts will be anything but long and boring, assure those behind the initiative. “The fest is all about cutting edge, innovative and experimental theatre, along with commercially successful, but profound, laugh riots that will breathe excitement into performances and audiences in a short time period,” Bharti stresses.
The five plays to be featured during the festival cover a variety of issues — from casteism and the plight of a helpless woman in society to a simple, honest tribute to a city and the complexities of human emotions. “Each play hopes to put forward a social message ... They speak about conflict and resolution,” explains Bharti.
Interestingly, every play uses a unique style to convey its message to the audience, whether it involves humour, solemnity, irony or sarcasm. Theatre veterans are pleased. “The interplay of diverse styles to cover exigent issues and the conviction with which these messages are expressed are bound to attract a large audiences,” feels theatre personality Lushin Dubey.
Venue: Kamani Auditorium, Copernicus Marg.
What’s playing when
21st October — 45” 35” 55”, 7.30pm
22nd October — Mahim Junction, 7.30pm
23rd October — Untitled, 7.
214th October — Ek Mamooli Aadmi, @
3.30pm; Court Martial, 7pm
Posted by Asmita Theatre Group at 4:15 PM No comments: 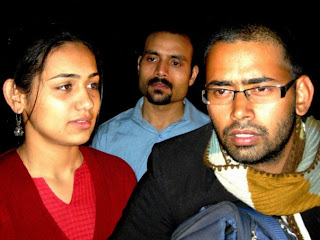 *'Ek Mamooli Aadmi' is one more milestone in Asmita's engaging repertoire of meaningful theatre. -Nikhat Kazmi (Times of India)
*Meaningful production.. .Another feather in the cap of a young director Arvind Gaur.
-Kavita Nagpal (H T)
*'Ek Mamooli Aadmi' is an excellent play with a lot of humou , lot of life's reality -Smita Nirula (Pioneer)
*The play is built around the protagonist Umesh's curiosity to find out why Brahmins had refused to participate in his father's 'tehrvi' ... production is excellent... innovative...-Romesh Chander (Hindu)
*Written by Ashok Lal and directed by Arvind Gaur (अरविन्द गौड़), the play is a deeply moving description of the travails of a middle-aged clerk who knows of his impending death. Reserved, reclusive and politically correct Ishwar Chand, decides to do some unusual things before dying. The acts are not a result of angst or deeds of rebellion, Ishwar just wants to savour another life, paint a new picture of himself for his own viewing. His escape from reality is a challenge to that very reality. Death becomes a motivation for pleasure; he wants to please others happy, and make others fulfilled - Indian Expres

Posted by Asmita Theatre Group at 4:06 PM No comments: 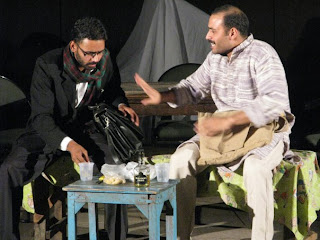