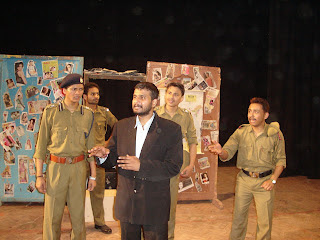 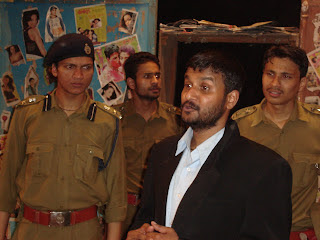 Court-Martial
When respect is denied to a man for the only reason that he is borne by 'low-caste' parents, the offence cannot simply be termed as a social violence. It assumes larger proportions of crime against humanity and society at large. Yet by the turn in situation the murderer becomes a winner whereas the victim is unforgiving.The culprit may receive severe punishment at the hands of the law but, in fact, it is the society which is put in the docks. Court Martial, written by Swadesh Deepak, is a story of recruit Ram Chander who is tried for murdering one of his officers and injuring another.
The Court Martial is presided by a war veteran. Col Surat Singh who has witnessed many 'life –and –death' situation. But this trial puts him in a queer position, so far unknown to him, and during the course of interrogation he realize that the issues at stake are much larger than what meets the eye. Realizing that the Indian army is the only government agency in which reservation on caste basis is not permissible. Court Martial presents a combination of legal and poetic justice.
Swadesh Deepak is a popular Indian playwright, novelist and short-story writer. Deepak has been active on the Hindi literary scene since the mid 1960s and is best known for Court Martial, a path breaking play that he published in 1991. Deepak's most recent book is Maine Mandu Nahin Dekha, a volume of memoirs. Deepak's work has appeared in all major literary periodicals of India, and he has more than 15 published titles to his credit. Several of his works have been staged and made into television programmes.Deepakji holds masters degrees in both Hindi and English. For twenty-six years, he taught English literature at Ambala's Gandhi Memorial College.
CRITICS SAYS
"Tight pace of Swadesh Deepak's Court Martial... not to be missed." - Kavita Nagpal ,(Hindustan Times)
"Arvind Gaur's hard hitting realism... his intelligent approach... strong play by Swadesh Deepak."
- Aruna Ahluwalia, (E. News)
"Kudos to Court Martial... a drama that goes beyond the limits of drama." - (The Indian Express)
"The Asmita team has created a marvelous piece of theatre out of a wonderful script... don't miss it. The time spent watching the play is well worth it." - Smita Nirula, (The Pioneer)
"Stealing the scene with revolt as the theme... Court Martial is an engrossing display of theatre for social awareness."
- Sushama Chadha ,(The Times of India)
"Excellent Performance by Deepak Dobriyal as Captain Vikash Roy... Swadesh Deepak's brilliant script... memorable production by the Asmita team and Arvind Gaur."
- Romesh Chandra, (The Hindu)
"Impressive Presentation: The much-talked about play Court-Martial, directed by the eminent young theatre director Arvind Gaur, was successfully staged here at Gandhi Bhawan Auditorium, on the first day of Shahjehanpur Theatre Festival. Court Martial is probably the first Indian play, wherein an effort to expose the rot rampant in the Indian army has been made."
- Amar Ujala
"Mirror of the Society: Court Martial is not just a play, but more aptly the real picture of the Indian society that brings us face to face with the caste-based feudalism, despite the constitutional & legal objections of the democratic procedures…Indian Army is one such government institution, which does not permit caste-based reservations. The play presents the truth very much prevalent in the Indian society. That, a person with merit, is traumatised just because of his low-caste origins. Can we march into the 21st century with such a narrow mindset? This is an important question that seeks an answer of us. Can we answer this question in this 50th year of our independence? Perhaps not!"
-Amit Kumar ,Rastriya Sahara
"Court Martial, scripted by Swadesh Deepak and directed by Arvind Gaur was staged at the Sriram Centre, on the first day of the ‘Asmita Theatre Festival’ organized by Asmita Production. The play is based on the caste-based discrimination rampant in the Indian Army. The strength of the play lies in its powerful dialogues that take it forward."
-(Alok Nandan)
"Not Just a Play: ‘Court Martial’ is not just a play written by Swadesh Deepak, directed by Arvind Gaur & enacted by Asmita-artistes. It is a burning truth of the Indian Society. Sensing that Indian Army is the only government institution, which does not permit caste-based reservations, ‘Court Martial’ presents a mixture of natural and legal justice, which is not only the truth of the Indian Army, but that of the whole Indian Society. That, despite all his qualifications, an individual is traumatised because of his low-caste origins is not merely social violence, but a crime against humanity. The monotony of the long court-trial was pre-empted by the seasoned performance of the Asmita artistes. This Asmita-presentation has proved to be a soothing experience, after many years, for Swadesh Deepak who created a countrywide flutter through this play. "
- Ajeet Rai (Nav Bharat Times)

Thanks for your kind support to relevant theatre.
Viren Basoya
Posted by Asmita Theatre Group at 3:54 AM No comments: