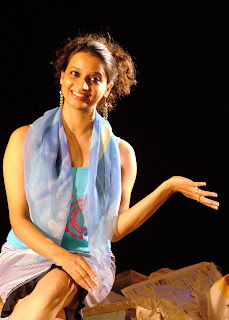 Solo for Peace
Hidden Fires, Arvind Gaur’s latest solo play, is a strong statement against communalism
Ankur Kalita ,indian express
Theatre director Arvind Gaur’s affinity for solo plays is growing. From Story of the Tiger and Untitled Solo to his latest play Hidden Fires with Rashi Bunny , Gaur has had a great run with one-man acts. ‘‘I think it is more challenging to work on solo plays. There is no backup in case the actor faults,’’ says Gaur, director of Asmita theatre group.
Scripted by Onassis awardee Manjula Padmanabhan, the play comprises of four monologues, all centered around anti-communalism. Each of the four parts is enacted by Rashi Bunny. The first part, Hidden Fires, is the story of a woman whose husband is involved in rioting, but who doesn’t realise the enormity of it until her own family is endangered. In Know The Truth, the obfuscation of facts by the government-owned media is highlighted. Bunny plays a newsreader here. In Points, 10 points against communalism are charted out. The most powerful part is perhaps the final monologue-Invocation-which addresses the audience. The character picks up a phone directory and selects 1,000 names at random. She then asks the audience if anyone can guarantee the safety of each of these people and, more importantly, what the surety is that any of them is safe from communal violence.
‘‘I have used minimum props in the play. There are many newspapers scattered on the stage to signify the news of communalism coming in from across the globe. The violence we are talking about is not only set in India, but also in Iraq, Afghanistan and other places,’’ says Gaur. The lighting is subdued and just enough to complement the character. Interestingly, the play is bilingual—the first monologue is in Hindi while the other three are in English.
Rashi Bunny, who has worked with Gaur for the solo Madhavi as well as Tatt Niranjana, is also the founder-director of the Banjara Theatre Group, which functions out of IIT-Kharagpur. ‘‘This play has been very hard for me because I have always been sheltered from violence. When Arvind Gaur told me the horror stories, I was devastated,’’ she says. Madhavi is travelling to the Armenia Solo Festival in September.
Arvind Gaur is also planning to take Hidden Fires to various colleges, starting with IIT-Mumbai in September. ‘‘Theatre should reach places where it’s needed, and the youth need to be sensitised the most,’’ he says.
Posted by Asmita Theatre Group at 12:13 PM