MADHAVI SOLO BY RASHI BUNNY :THE STORY OF EVERY WOMAN,HT CITY 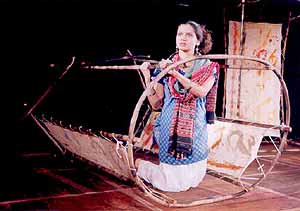 One woman. Like the Earth, she bears, she nurtures, she cares. She must give up her sense of self, her feelings, her desires to fulfil her ‘duty’ towards the ‘man’. The ‘man’ sometimes is her father, her lover, her husband, her brother, her son – it is an eternal journey of sacrifice. This one woman, you may call her Madhvi, Mandakini, or Monica, she has passed through 5000 years of history, merely existing for the ‘man’.
The play, ‘Madhvi’, solo by Rashi Bunny staged at JKK last evening, brought to town by the IILM Academy of Higher Learning, is the story of every woman. Dimensions of Time and Space cease to matter. Canvas and colours of our culture - mehndi, gulaal, haldi, roli, sand are used by the protagonist to paint the _expression of her feelings as she goes through the play. The woman is a symbol of creation. And yet she must suffer.
Madhvi, the beautiful daughter of Yayati is given away to a devoted disciple of Guru Vishwamitra, Galav. Why ? Galav must fulfil his duty towards his guru. He must procure 800 Ashwamedha horses as gurudakshina. An indomitable task. The woman must step in to rescue the man from his predicament. First, the man who is her father, who has to prove to the world he is a ‘mahadaanveer’. So the daughter must be sacrificed. The dutiful disciple, Galav, must abide by his word, given to his guru.
Madhvi, bestowed with the power of recurring youth and the ‘vardaan’ that she will give birth only to sons, is used by Galav as a mere instrument. Both men endeavour to achieve fame through the resilience and forbearance of a woman.
She is auctioned off to one king after another, to bear each a son in exchange for 200 horses. The raj jyotish examines her body, from her soft fingers and toes to her shining forehead and pronounces her destined to bear only ‘chakravarti’ sons. She wins the love and respect of the kings – after all she will bear the heir apparent to their thrones.
A woman exchanged for horses. Because she must respect the wishes of her father. For she loves Galav, pines for him to be free from his responsibility, dreams of a life with him. She feels for her child, Vasomana. But she must abandon the emotional shackles of motherhood for she is on a mission for the man she has vowed herself to.
A flood that drowns all the horses and Vishwamitra buys the surviving Ashwamedhas. Galav despairs and Madhvi rises once again to meet the blows of life. The woman self-auctions herself to Vishwamitra for the last 200 horses. The last son is born. There is a resonance of gaiety, celebration. The great Yayati will finally give away his Madhvi in a swayamvara.
Madhvi yearns for her life with Galav. She dreams to be free. She has gone through the courts of three kings and the guru himself just for the love of her man. Galav finds her in her real state, wrinkled, tired, middle – aged. He will not accept her without her youth. She feels she is free to be herself at least with the man she has lived her life for. But Galav, is just another ‘man’. He must escape ugly reality. “You have lived with my guru, how can I take you back in my life ?”
Life has come a full circle. Madhvi, the woman, the individual is lost forever. She is alone, she must bear the brunt of living only for others, never for herself. She dawns white, signifying yet another lonesome journey.
A solo performance by Rashi Bunny, directed by Arvind Gaur, based on a Bhishma Sahni’s script was a gripping portrayal of reality. Madhvi is reality. A powerful rendition of 16 roles by Rashi, evoked mesmerised silence and resounding applause from the audience. Recalling her earlier performance in Balaghat (MP), Rashi said, “a lady walked up to me and asked me, ‘can I touch you ?’ after watching the play. I felt so small. I am on a mission, a spiritual journey, I’m not acting.”
Working in two more solo performances, ‘Hidden Fires’ by Manjula Padmanabhan and ‘Walking through the Rainbow’, for Rashi the woman, Rashi the actress, all boundaries fade as she immerses herself completely, unabashedly in her roles.
The play was among the very rare meaningful theatre we get to watch in our city. Thought provoking, overwhelming, it left so many fighting their tears. Each person present would have identified with the double standards of our society, each person sitting there would have felt guilty of having reduced the existence of a woman to a mere object, a commodity. Each woman would have relived some part of her life.