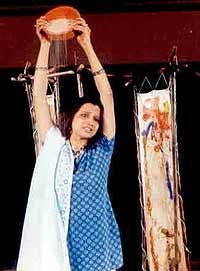 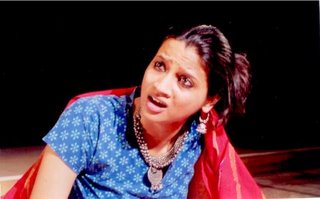 Madhavi was an extraordinary girl, in mind , body and soul. And she was blessed with a unique boon of giving birth to invincible kings- CHAKRAVARTI RAJA. Also after child birth she could regain her virginal beauty on performing a sacred rite. Her father retired king YAYATI was very powerful king but his real pride lied in being called the greatest donor of the world. That is why when GALAV- a young disciple of guru Vishwamitra, approaches him for help King Yayati donates his one and only daughter Madhavi as medium for fulfillment of Galav’s promise to his Guru. And there begins a journey of love and loss.

The play begins with a song about a young girl opening doors of dreams and youth. Then a narrator talks about importance of fulfilling one’s promise and duty as mentioned in sacred religious texts. To elaborate the concept of duty as one’s dharma, Narrator introduces the story of madhavi from the great Indian epic MAHABHARAT (Peter Brook created his famous play based on this epic with international cast)

When Lord Vishnu is disturbed in heaven while meditation because a young man is about to commit suicide because he cannot pay GURU DAKSHINA- a token of gratitude and respect to his teacher- Guru VISHWAMITRA who in anger ordered Galav to 800 ASHWA-MEDHI Horses- the strongest and fastest Horses that are found only with powerful kings. Lord Vishnu guides Galav to meet Yayati who donates his daughter Madhavi to show how big a donor he is. Madhavi quietly follows her father’s orders and leaves with Galav to find kings who would give him the required horses. The first song is played again to show irony of fate.

Scene 2
Galav hesitatingly takes Madhavi along but is attracted to her beauty and boon when madhavi tells him that she had already dreamt of him and many horses. She imagines him to be her destiny and is ready to do anything for her love including delivering sons for the kings who would give horses to galav.

Sc 3:
King Haryasch is impressed with madhavi’s innocence and beauty as soon as they both enter his court but the king orders his state Astrologer (RAJ JYOTISH) to check if madhavi can give birth to invincible sons. Astrologer inspects Madhavi’s body thouroughly and confirms of her unique boon. King Haryashch is ready to keep Madhavi but he only has 200 special horses and will give them only after madhavi delivers his son. They are in a fix but madhavi realizes that they will have to go to another king for the rest of the horses and stays behind as Galav moves to find other king with special horses.

Sc 4:
Narrator spells scriptures that a man is ambitious but a woman must only serve and sacrifice. When Galav comes to take Madhavi after one year, Madhavi can not bear to leave her new born baby. Galav fails to understand madhavi’s sudden love for a child of the king but madhavi is a changed woman now. Galav accuses madhavi of lack of commitment and strentght. Madhavi questions that only she suffers the separation from child whereas her fathers becomes famous donor and Galav obedient disciple, nevertheless she performs her sacred rite and leaves for another king.

Sc 6:
narrator tells about an unexpected flood where all the horses are lost and only remaining horses are with old king Ushinar or with Guru Vishwamitra. Narrator questions politics of dharma and duty! Old king Ushinar is overwhelmed with madhavi’s beauty but once again madhavi leaves without even looking at her new born. Narrator tells juts as a creeper needs a tree a woman too needs a man for existence. That is why when suddenly one day Galav discovers that Madhavi has left him alone in the forest , he thinks that she left him for the love of her sons or for comforts. Guru Vishwamitra discovers madhavi at his hermitage and thinks that she has come to ask for forgivance. Madhavi markets herself and says that for the love of galav, she will offer herself to the Guru who can then take as Galav’s promise of 8oo ashwamedhi horses completed.
Narrator questions the role of guru and meaning of promise and duty if it depends on a yoing girl’s sense of duty and love!

Sc 7
the promis is fulfilled and king yayati porganises a SWYAMVARA for madhavi where she can choose her husband. Many kings including those whoses harem she has lived in, come to participate. Galav’s convocation ceremony is also there and whole ashrama is decorated like palace. Madhavi goes away in the quietness of forest where galav comes searching for her but fails to recognize her as madhavi has not performed the sacred rite to regain virginal beauty. Madhavi expects galav to love nad accept her for all the efforts she has made to fulfill his duty but galav refuses her by saying that she has slept with his Guru and he can’t marry his teacher’s keep.
Madhavi is shattered and she frees galav for he is not the man for whom she has waited each moment for all these years. She beckons him to go for his convocation where he will be called a great sage nad priest. She walks off while questioning the role of society and the roles which can trample over a girl’s dedication and love.

The songs are specially written with metaophors on the customs and the painting in between scenes not only reperesent the journey of the protagonist but also the subconscious responses of the actor playing various roles in this Solo Performance.
Posted by Asmita Theatre Group at 6:45 AM