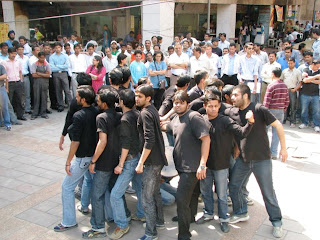 Street play Garbage by Asmita theatre
(Let's do it! Delhi) at 1pm -2 pm
at Bhikaji Cama Place.
2 shows at Lunch time.
Actors-Shiv Chauhan, Disha Arora,Saurab Pal,Rahul Khanna, Himansu Maggu,Palak Bhutani,,Pankaj Raj Yadav,Anish Kumar,Devesh Nigam,Ketan Kalra,Narendra Thakur,Suraj Singh,Himansu Katara,Manu Chaudhary,Arvind Keshari,Pankaj Shandilya,Dipesh Mohlay,Rahul Rai,Manoj Yadav,Sachin Saxena,Nitish,Gaurav Mishra,Tarun,Pankaj Datta,Abhay,Tarun,Ankit Jain,Pooja Pradaan, Shilpi Marwaha,Shiv Kanoongo...
For details pls contact -9958793683 (Shiv),9540656537(Shilpi), 9811935111(Disha)
____________________________________
About the Play "Garbage" - synopsis
The play focuses on the need for basic civic sense in our country. This street play "Garbage " is a part of an initiative taken by -" Let’s Do It! Delhi ’" which is a small group of residents who passionately believe that together we can make a difference and presented by ‘Asmita Theatre Group’ which is one of the leading Hindi theatre groups in the country and stands committed to aesthetically innovative and socially relevant theatre .Civic sense is nothing but social ethics. It is belief in hygiene, respect for other members of society, and human behaviour.
It is consideration by the people for the unspoken norms of society. A lot of people assume that civic sense is just about keeping the roads, streets and public property clean. But civic sense is more than that; it has to do with law-abiding, respect for fellow men and maintaining decorum in public places.Civic sense, or rather the lack of it, is a topic that has been widely discussed and argued in India. Somehow, most Indians do not care much for civic sense. And this attitude is prevalent across all sections of society. We people today are so driven towards our personal goals that civic sense as an ethic has become a low priority, almost a nuisance for us. We don’t realise that this sort of attitude is not going to harm anyone else but “US” only. Civic sense has dropped to an all-time low in recent years, as is rather obvious from the current state of society.Being inconsiderate towards fellow society members will only come right back at us. We have to be social, mature and unbiased when it comes to situations in public.
The current state of public transport, for example, is disheartening. And we have no one to blame but “ourselves” for this condition. There are spit marks, urine, vulgar graffiti, random garbage and overflowing sewers at every nook and corner of India. NO city in this country has managed to fight the menace. It is easy to pin everything on the government, but people must first question themselves and their own civic sense. Roads are not dirty because nobody cleaned it, but because somebody dirtied it in the first place.Using 'everybody does it' and ‘what difference can I alone make’ is an excuse and only an excuse. The action has to start from US only. If every individual does his or her own bit, he or she can definitely make a huge difference and can lead to change. India has really diverse people and the need of the hour is general civic sense.And thus we as socially responsible theatre actors are taking a step forward towards this goal through the medium of relevant theatre. So join us in this social initiative and be the change you want to see as we believe that if we all do this together, we will definitely succeed.
__________________________________________
About Let's do it! Delhi
We are a small group of Delhi residents who passionately believe that together we can make a difference. On May 3rd, 2008 Estonia lifted 10000 tons of garbage in 5 hours and cleaned a country. Estonia is 30 times bigger than Delhi and has 9 times less people so Delhi is 270 times more densely populated than Estonia. Our challenge will be different but there is a lot the cities and countries of the world can learn from each other and we hope that Delhi will benefit from and contribute to the Lets Do it World Movement.
For Details pls call- 9911013630 ,9540656537,9899650509
asmitatheatre@gmail.com
Posted by Asmita Theatre Group at 7:49 PM