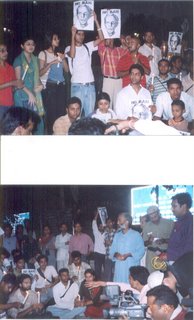 We start this article with a recollection of events and sharing of what Asmita Art Group artists went through the course of events in last few weeks after deference of staging of Mr. Jinnah by Delhi Police. This article is addressed to anyone who believes in values of democracy.

Arvind Gaur received a script on Jinnah written by Dr. Narendra Mohan about seven months ago. The script of the play focuses on scriptwriter's interpretation and narration of an introspective dialogue of a leader who influenced masses, had the intelligence and courage to withstand political course of events-rise and downfalls.

This script and portrayal of Jinnah intrigued Arvind Gaur, the Director of the play 'Mr. Jinnah', so much that he, along with his team of artists, started research work and discussions on Mr. Jinnah about six months ago. Long discussions and debates followed among the team members which, interestingly, comprises of people with various ideological inclinations and orientations.

As all the team members would recall, it was not merely reading of a script but an intellectually stimulating exercise where a person's political life along with his personal life--projected as well as un-projected self --were discussed at length to find out possibilities of interpretation and visual representation on stage. Several meetings followed with the scriptwriter where he shared and discussed his viewpoint and interpretation not only with the Director but also with the team of Mr. Jinnah. Following this, almost two months ago, the team started with 'on floor' rehearsals of 'Mr. Jinnah'.

Fortunately or unfortunately, as it would seem to any individual reader, it's a coincidence that Asmita announced the staging of the play on Jinnah when Mr. Advani's statements on the leader, held responsible for the partition and the events following 1947, have been in hot debate since last month among various political circles, in news columns-online as well as in print, on various discussion forums.

However, what is most unfortunate is how the system of a democratic state treated a work of art, in the name of maintenance of law and order. You may be aware that Asmita's play "Mr. Jinnah" has been 'banned' from being staged. The 'ban' word is probably missing from the official letter issued by Delhi Police South District Office but the meaning is all the more same. The play was "deferred" by the Delhi police on the plea that they were not able to scrutinise the script as it was not legible.

Asmita had applied for various clearances on May 22 about a month ago. The clearance from the traffic police and the entertainment tax office was duly procured, however, the south district police asked for a script of the play, which was immediately submitted on June 16. But, the permission was denied on June 21, a day before the announced date of the show, without assigning any clear reason. The police so far have not been able to cite a proper cause for the ban, though they agree that there is nothing objectionable in the play. Is not allowing staging of the play an attempt to culture policing and moral policing of the artists of this city, the capital of a democratic nation? The TOI editorial, June 24, also mentions," The police action is outrageous. It's a sinister assault on creative freedom".

On June 22, 2005 as a silent protest the writers and dramatists, authors, artists, actors, filmmakers, theatre lovers, and other intellectuals, historians and general public symbolically staged a portion of the play in front of the Lodi Road police station. The lead actor of 'Mr. Jinnah', Mr. Susan Brar was aggrieved due to demise of his mother the same morning. Though it was very tough but Susan braved the time and decided to stand by the team in joining the protest.

On June 23 the protest was again staged by the team where the theatre artists, writers, journalists, students were invited by the team of Mr. Jinnah to view a portion of rehearsal of the play. Following this a silent candle lit protest march was carried out from the venue of the rehearsal to the Delhi Police Headquarters at ITO. The protesters placed the candles outside PHQ and again staged several portions of the play.

However many questions crop up about the colonial type mindset of the police and the system. It is a matter of great dismayal that no one except the Asmita team has ever read the script of 'Mr. Jinnah'. We say this because; the ordeal of the team of 'Mr. Jinnah' does not end here. The team has been approaching many of the famous auditoriums in Delhi to hold its performance however; none of them has agreed so far to allow booking for staging of 'Mr. Jinnah'. As if, Jinnah's Djinn would start haunting the place.
One auditorium manager even asked the director to get no objection certificate from several political and religiously affiliated organizations!! Why does a psychodrama need religious sanctions? And, that too, when none of such organizations has till now raised any sort of objections against Mr. Jinnah. It seems two hundred years of colonial experience has converted us into Macauley's children for generations to come. We are so scared of ourselves, as unsure of our convictions and values as a democratic nation and have become so much used to an outsider being our master that we as a nation can not muster enough courage to look up into eyes of our past.

The right of the citizen of a democratic state is being blatantly trampled by our own colonized minds. We do not actually need an East India Company to do that to us. It seems to be a suicidal attempt by a state which has declared itself to be a democratic republic. With events like this, the issues of social relevance in the artistic fields would soon take a backseat and a mindless entertainment would emerge which takes no responsibility of society and has no concern with civil liberty.
Are we ready to pay heed to the slow poison killing democracy? It's high time that all of us who have even slightest concern for India as a democratic nation and democracy and civil liberty as a value, must come forward, hold hands together for the freedom of _expression. It is now just not a matter of how the police treated an artistic _expression, it is also a matter of what we are doing to ourselves by resurrecting baseless fears and inviting any sort of self styled religious representation to take decision for ourselves.

Coming back to the play, like most great tragedies, King Lear, Julius Caesar, Hamlet, Macbeth and Othello the play is more of a psychological scrutiny than a political retrospective or a historical docudrama. The visual treatment of the play is unconventional. The director has chosen a visual depiction of Jinnah's introspection, his pain, regret and sorrow as out of body projections. The facets of his character, emotional outbursts are simultaneously expressed through his body, heart, mind and soul, played by four actors other than Jinnah himself.

Let us all join hands together so that democracy may live and our future generations breathe not in a colony but in a democratic nation. Let us safeguard what is every citizen's right to free _expression in India.

Anyone interested in visiting us to view rehearsals of 'Mr. Jinnah' is most welcome. The play would soon be staged at a University in Delhi.

This write up is submitted with a request to the reader to forward it to friends all over the globe. It's just not a matter of Censorship by Police in India. As a human, do you believe in right to free _expression? Decide for yourself and act today.

P.S. This write up is submitted with a request to the reader to forward it to friends all over the globe. Its just not a matter of Censorship by Police in India. As a human, do you believe in right to free _expression? Decide for yourself and act today.
Posted by Asmita Theatre Group at 12:51 PM