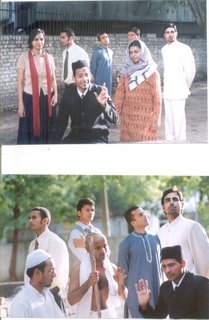 ‘Defer’ is such a sweet word, is it not? It sounds so ominously sensible, so brimming over with the milk of human decency, that the Delhi police must surely be wondering what all the fuss is about. I mean, they haven’t actually ‘banned’ (oh, that dreaded B-word!) Asmita’s latest play Jinnah, which was to have opened at the India Habitat Centre on 22nd June. They only ‘requested’ (another sweet word, that!) the group to ‘defer’ its performances so that their experts get time to examine the script.

Can anything be more polite and decorous than that! Ok, the police asked for the script with only a week to go for the shows, despite the fact that the application for performance had been submitted to them a whole month earlier. But that’s only bad timing, no? Hardly the kind of

thing that should get people worked up. So, it’s unfortunate that members of Asmita, along with others who believe in these silly things like freedom of speech, freedom of artistic creation and the free exchange of ideas, have not truly appreciated how difficult it must have been for our police to adopt such a phrasing, unaccustomed as they are to refined expression.

The poor police have also had other problems to contend with. Like, reading scripts, for instance, to determine whether the play should be performed. Whether the police should be doing this job is another matter altogether. (Incidentally, do you think you and I aren’t safe on our roads any more because they are busy reading playscripts?) That an entire script should be tarred as suspect because they couldn’t decipher an actor’s handwriting — which constituted, oh my God, a full FIVE percent of the typewritten script — must surely have been a tough decision for the police to take. So tough that even today, a full twenty two days since they first laid hands on the script, they still haven’t said a word about the text.

Who do the police think they are fooling? Do they really think anyone’s swallowed their sanctimonious platitude that they haven’t banned the play but simply requested it be deferred? When auditorium bookings don’t happen at short notice and a production that is deferred can take months to get on the boards again, when the police seem quite content to let things linger in limbo, it’s plain that this ‘deferment’ is in effect a ban. (Either that or the experts that the police have cobbled together have been laid low by some mysterious reading-disability!)

Actually, from the point of view of the police, deferring a production is far more convenient than banning it. Deferring s o m e t h i n g they have the gall to declare they know nothing about (because, after all, they claimed the script was illegible) discharges them from the obligation to see the production, negotiate its meaning and then give reasons for a ban. Perhaps that’s too much work. Perhaps, it may also over-strain our police force if it is expected to conduct itself in a logical and reasonable manner.

Some months ago, the Police Commissioner had himself read the script of The Vagina Monologues and cleared it for performance, after consulting with his female colleagues.

Notwithstanding my skepticism regarding their qualifications for this task, I wonder if Jinnah will even get similar attention. For, this is no high-flying production visiting Delhi but a home-grown play by Arvind Gaur, a stalwart of the local theatre scene.

I humbly suggest that while we wait for the police to ride out a storm of their own making, ordinary English users can use this event to brush up their language skills. All ye hopefuls out there, repeat after me: the word ‘BAN’ is henceforth to be spelt as ‘D-E-F-E-R’ — By Order (sorry, ‘Request’): the Delhi Police Handbook of Convenient Phrases.
Posted by Asmita Theatre Group at 10:35 PM