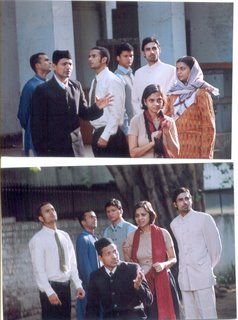 'Mr Jinnah', a play directed by Arvind Gaur of the Asmita theatre group and written by Narendra Mohan, was recently "deferred" due to "technical problems" amid much controversy. The play portrays Jinnah as a tortured person who turned away from Congress politics due to differences regarding representation of Muslims, and charted a separate course for himself. The play's focus was on Mohammad Ali Jinnah the person, his love for and then rage against his young Parsi wife, anguish at her early death, and intolerance when his daughter wanted to marry a Parsi. Why, one wonders, does the police object to a historical figure being shown as a man with human strengths and human failings?

In fact, after the stage show was banned (or, in police doublespeak, "deferred"), Delhi's theatre-lovers gathered to see an open show of the play under a tree in a large compound at ITO (Delhi's Fleet Street).
The ambience was perfect and the performance was well-received. Afterwards, actors and audience walked in single file, candles in hand, to the Police Headquarters at ITO, where they staged a silent sit-in to register their protest at the denial of freedom to perform at the India Habitat Centre, where their shows had been planned well in advance. Refusal to allow the performance came just three days before the planned dates (June 22 and 23), when tickets had already sold out.

A number of theatre-persons, students and activists joined the protest against the police diktat. At the protest on June 23, renowned dramatist M K Raina averred, "The police have no business to interfere in our profession. Even if the script has an element of controversy, it cannot be stopped from being performed."

Interestingly, while 'Mr Jinnah' is a study of the man widely acknowledged to be one of the architects of Pakistan, 'Nathuram Godse Speaks' examines events from the perspective of a rightwing Hindu extremist whose personal trajectory led him to commit murder. (Godse killed Mahatma Gandhi on January 30, 1948.)

Both individuals represent facets of communal politics - from opposite sides in terms of religious association. While the former play shows Jinnah's development over the decades, his contribution to the creation of Pakistan and his remorse about the violence occasioned by Partition, the latter examines Godse's trajectory from being a supporter of Gandhi to a stage where he felt duty-bound to kill him. There are differences, of course. Jinnah was a sophisticated, intelligent, charismatic politician; and Godse an unknown person, whose one decisive act assured him a permanent, if unenviable, place in history.

Both plays are in-depth psychological studies of figures who crucially shaped the history of the subcontinent. We may question their contributions, criticize, and even condemn either one or both of them. But there is no reason why we should fear to study them or review their roles. In fact, critical and post-modern historiography teaches us the need to examine history from different angles.

However, when figures such as Jinnah or Godse - conventional villains of our standard history texts - are subjected to sympathetic study, it seems to raise the hackles of the powers-that-be. It is deeply worrying that the authorities in India are free to casually exercise arbitrary restraints on intellectual freedom.

The Indian Constitution guarantees a democratic model. Yet, the bane of censorship has always dogged our intellectual and political spaces. Pradeep Dalvi, writer of 'Nathuram Godse Speaks' and a second play 'Nathuram: An Experience', performed the second play only outside India. In this, Godse's ghost revisits the country and meets many people. Said Dalvi (back in 1999), "I will never show the play in India...India, I have written off."

Many people criticized Dalvi's sympathetic portrayal of Godse; Mahatma Gandhi's nephew Tushar Gandhi alleged, "The play glorifies Gandhi's murderer." Yet, objectionable views are not reason enough to ban a play. A democratic polity should be able to entertain the expression of all shades of opinion. India claims to be a plural society, with a free press and a public domain where artists and intellectuals are free to project diverse points of view.

Controversies and debates ought to be the stuff of daily political life and public debate. Openness to others' opinions, the readiness to frame and explain one's own thoughts and views, and flexibility as well as respect for differing perspectives should be basic values practiced in any open society. To disallow a cultural production because it presents an unconventional, or even unsavory, point of view, smacks of intolerance and bigotry.

The plays on Godse and Jinnah suffered from authoritarian and heavy-handed intervention, which actually feeds into furthering fundamentalism and brutal orthodoxies. While Godse's murder of Mahatma Gandhi was a heinous crime, to go against the right of another person to differ is to actually follow in Godse's footsteps rather than Gandhi's. Use of force, controls and violence in order to decide matters was Godse's strategy - certainly not Gandhi's!

Pritish Nandy - cultural mandarin and Rajya Sabha member from the Shiv Sena - spoke out against censorship, during the controversy over Dalvi's plays: "Government intervention in matters of art and literature is not just ugly, it is dangerous. It destroys the very spirit of democracy and free thinking and leaves bloody stains on the polity." Surprisingly - and ominously - matters have come to such a pass that the extreme right is preaching to bureaucrats about the virtues of tolerance!

Unless we watch out for the growing intolerance displayed by those in power - especially the police's increasing tendency to clamp down on fundamental democratic and human rights - we are moving towards a society that suppresses political thought, and freedom of expression and cultural performance.

By arrangement with Womens Feature Service

Top | Society
Posted by Asmita Theatre Group at 8:04 AM