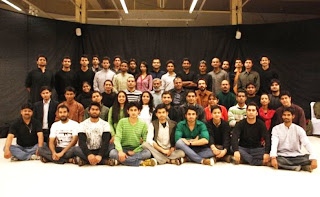 Asmita theatre group is celebrating 17th year of committed and hardcore theatre (24th Feb).Asmita has been continuously and seriously working in the field of Indian theatre thus becoming the landmark of Indian Hindi theatre.Asmita group has always concentrated on actor training and has given a league of serious and committed actors to Indian cinema and theatre. In all these years it has given a momentum to campus theatre by supporting socially relevant theatre and issue based theatre thus spreading awareness in all sections of society by making it a vogue among the youth.
Asmita has left no stone unturned from school to colleges to old age homes; from spreading awareness in the leprosy colonies to bringing their stories among the ones who could bring the change. In its long term it has succeeded in reaching the hearts as well as minds of people. From bringing change in the society to changing the world it has shined all through the road. Asmita has been very active in street theatre thus spreading awareness among the ones who need the change and ones who could bring the change, from performing in the alleys to Cafe Coffee Day's it has bought theatre within reach and has given new defination to theatre as a profession. Asmita encourages actors to act with a motive and has promoted individual change for the actors before introducing the same idea among the society for a better surroundings.
After 17 successful years of making theatre a movement and a trend among masses, it has now succeded in bringing theatre to people's home.Arvind Gaur is the man behind, he is the base as well as the walls...concisely the foundation stone of Asmita. Arvind Gaur is the one behind making Asmita an Actor's medium, he has given the word actor a new meaning and thus has today succeded in making theatre a medium for bringing change in the society.
Asmita Theatre- Celebrating 17th year of theatre movement
10th feb- Bertolt Brecht's poems presentation at rehersal venue,ITO
12th feb- street play at LIC13th feb- street play at Gurgaon & IIT Delhi
15th feb- Street plays at Gurgaon
20th Feb- Ambedkar aur Gandhi at Eureka fest
24th Feb- New actors production at rehersal venue,ITO
25th feb t0 6th March- Street plays at different venues
7th March- Stage production Mohan Rakesh's -Leheron Ke Raj Hans on 7th March at SRC , Mandi house
For Details pls call- 9911013630 ,9540656537,9899650509
asmitatheatre@gmail.com
Posted by Asmita Theatre Group at 9:53 PM