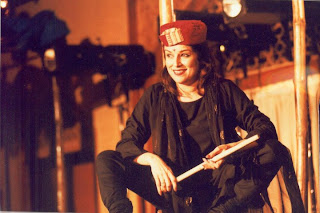 Director’s Note- Untitled SOLO is basically a "fusion" experimental venture. This fusion... is incorporated in each element of the design from language of performance, set and music to acting with puppets my attempt was to make a journey to discover a new language for solo performance. As a director, the challenge to maintain the socio -political relevance of the theme while exploring new presentation style has been an ever stimulating process for me. The script is pendulous swing between the two stories (one Indian & one western) and touches upon pertinent aspects, giving voice to the woman's case! Should a woman hit back? And why not? What does it appear? Is it justified?
The production is a combination of English and Hindi, and Lushin’ s co-actors are puppets, herself playing different roles to project different characters. Lushin not only plays characters physically but at the same time delves under the skin to look at their psyche, using her voice, gait, body movements, masks, puppets, different scarves and music etc. The result is a true to life characterization of a lecherous king (husband), his wife, maid sweeper, a young girl in her teens, media & her old maid and many more.
-Arvind Gaur, Director

About the play
The foundation for the script is based on Vijayadan Detha’s story “Nyari Nyari Maryada” and Dario Fo’s short play “Medea”. “Nyari Nyari Maryada” the story by Vijayadan Detha, is also one where women surprise the men.Men who relentlessly treat women as “Kottputli’s”.Dario Fo reinterpret Euripides’s “Medea”. “Medea is one of the most horrific and powerful Greek tragedies, a play of dark revenge and slaughter and is dominated by the voice of “Medea”, the foreign princess who aided Jason, her husband, in the past, and whom he now spurns for younger women. She retaliates by murdering her own children…And therefore, in a sense “Killing” him and herself.
“ Be a good wife and a good mother and you will have space to live in my house," says Medea's husband, a character from Greek mythological, who kills her own children to take revenge on her husband, who had married a much younger girl. "Respect him and love him, and he will let you live in his house," said the wise old nurse. Medea's crisis was, she had to make a choice, if she wanted to remain a proud woman or become a wise woman, by sealing her lips, and let everything be, as it had been.
A parallel tale from Rajasthan, written by Vijaydan Detha, narrates a tale of a king's court, where a mehatrani (sweeper woman) comes, asking for justice, because her twelve year old daughter had been raped by the pundit of the court, who was, in fact, her father. The Raja, the Diwan and even the court jester silence their women by telling them that man need to have change of taste. One day, it is the Rani who calls the court to declare, she will get justice for the sweeper woman's daughter. She declares to the court that even she had changed her taste And the play dwelt on precisely this query -- what is women's maryada. with violence against women, cheating and child abuse .

About actor Lushin Dubey-
Lushin Dubey did her Masters in Science in Childhood and Special Education in the US (after a Masters in History from Delhi, India) and was then deeply involved in teaching mentally challenged kids. In 1986 she set up Kids world with her cousin Bubbles Sabharwal. "Untitled" solo directed & scripted by Arvind Gaur, traveled to the US, UK and Edinburgh Fringe Festival.’ Untitled' makes its third trip to the U.S. last year along with 'Bitter Chocolate' directed & scripted by Arvind Gaur . 'Untitled' has already completed more than 200 shows.10 shows in Scotland. In the U.S. some of the cities have been Boston, Chicago, Rochester, New York, Dallas, Houston, Washington D.C., and Palo Alto San Francisco. It has also been staged at the Smithsonian Institute and at Harvard. Lushin has acted in several films and serials. Her first one being 'Perfect Husband' which debuts at the Cannes Festival .Lushin is married with two daughters, Ilina and Tara. Her husband, Dr .Pradeep Dubey, Leading Professor in Applied Mathematics at Stony brook and Adjunct Professor at Yale, has always supported her creative Endeavour’s. She divides her time between the US and India and looks forward to being involved in cultural interaction between the two countries, especially via the medium of theatre."Work is defined by age. The older you get, the more you question. I find myself asking questions I would newer have asked ten years ago. This quest has led me into plays like `The Life of Gautama Buddha`, 'Untitled Solo 'and most recently, 'Bitter Chocolate' ( both directed by Arvind Gaur). It has been a self-perpetuating process, as one play has given birth to the other “- Lushin Dubey