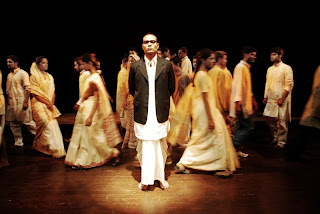 Rajesh Kumar's
"Ambedkar AUR Gandhi"
directed by Arvind Gaur
Sunday, November 29, 2009
at Saint Gadge auditorium,Lucknow
Presented by Bhartendu Natya Academy (BNA ) & Alag Duniya
GANDHI AND AMBEDKAR – REVIEWS
Ambedkar aur Gandhi” is one of Asmita’s classics…Asmita’s latest presentation, young playwright Rajesh Kumar’s “Ambedkar aur Gandhi” was marked for healthy audience response both for its content and the director Gaur’s overall production design… Never before have I seen such an intelligent post-presentation discussion between the audience and the director. It just goes to show if the theme is relevant and the presentation professionally good, the audience is waiting for it...The cast does full justice to the playwright and were true to what the director was trying to get out of them. Bajrang Bali Singh playing Ambedkar was excellent particularly in his last speech after Gandhiji’s death.Viren Basoya’s Gandhi, calm and collected throughout and yet emotional when he says he wants to be reborn as a Harijan. In response, the audience breaks out in a non-stop applause.Apart from the two lead players, others who stand out are Shilpi Marwah as Rama Bai, Pankaj Raj Yadav as Devdas Gandhi, Malay Garg as Kedarkar, Raj Sharma as Sadanand and Rahul Datta as Sardar Patel.To lend colour to the presentation, there was, as usual, excellent music by Sangeeta Gaur and some popular songs that brought back old memories. “Ambedkar aur Gandhi”, to my mind is one of Asmita’s classics and Gaur’s best-directed presentations that must be taken around the Hindi speaking States... -ROMESH CHANDER, The Hindu (An ongoing dialogue, 21 August, 2009)http://beta.thehindu.com/arts/theatre/article6277.ece
Gandhi- Ambedkar debate moved, impressed the gathering …play succeeded in arousing the audience…debate received constant applause.
- Rashtriya Sahara
Politics takes centre stage...social political play about the geopolitical and social scenario in the country in 1930’s…reveals the two extreme thinking- Gandhi and Ambedkar …relation between the two despite their differences.
- Hindustan Times (Live correspondent)
Arvind Gaur’s 64th endeavour follows its predecessors- a social and political play… political dialogues on the social concerns of the time… antithetical views and the realisation that Gandhi Ambedkar’s vision was one, but means different — form the fabric of the play…issue of untouchability and the plight of the Dalits is a significant thread expressed in the play……..
- The Hindu (Preview)
Gandhi and Ambedkar attacked caste system…to stop untouchability, terminate caste system- thought expressed lively in the debate between Gandhi and Ambedkar…arguments received constant applause…war of thoughts between Gandhi and Ambedkar stirred the audience…expresses the clash of thoughts…chorus gave the play a new height.
- Dainik Hindustan
Fight between the thoughts expressed brilliantly in the play…Gandhi and Ambedkar an unforgettable experience…expressed the conflicting thoughts of two political stalwarts with similar aim…
- Amar Ujaala
This religion cannot be reformed but only be rejected,” exclaims Ambedkar and declares his decision to change his religion from Hinduism, while Gandhi believes “Untouchability can be erased without disturbing the caste system.” Gandhi and his followers ask Ambedkar why changing of religion was important to him and in response Ambdekar asks Gandhi and Gandhians, why Swaraj is important to them. While Gandhi says “I will not let every village in this country be divided between touchables and untouchables,” Ambedkar cries out saying “I have no country.”- It is this kind of difference of opinions and thoughts in addressing and fighting the problems of history which takes the centre-stage in play
-B.A. Samvartha ('Sahil'), Research Scholar,Theater and Performance Studies, School of Arts and Aesthetics,JNU
http://crazymindseye.wordpress.com/2009/09/04/ambedkar-aur-gandhi/
Details pls call- 9911013630 ,9540656537,9899650509asmitatheatre@gmail.com http://sites.google.com/site/asmitatheatre/Home
Posted by Asmita Theatre Group at 12:47 PM