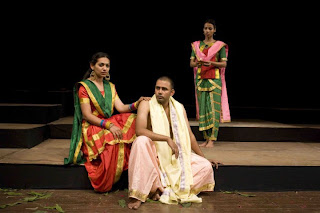 Actors- Viren Basoya,Shilpi Marwaha, Pooja Pradaan, Pankaj Raj Yadav, Malay Garg,Shiv chauhan, Disha Arora, Saurab Pal,Vrinda Vedi
For Details pls call -9911013630 ,9540656537,9899650509,
asmitatheatre@gmail.com
Tickets -Rs-200/, 100/ ,50/
"Leheron Ke Raj Hans' (मोहन राकेश का नाटक - लहरों के राजहंस )The Swans of the Waves),based on ancient Buddhist tale of love, conflict ,inner struggle and renunciation.'Leheron Ke Raj Hans' is the most noted play of Mohan Rakesh, an ancient Buddhist tale on the renunciation of the Buddha, and its after affects on his close family, was first written as short story and later turned it into a radio play for Radio and broadcast under the title "Sundri", though his struggle over different versions of the play lasted for nearly 20 years, before creating his masterpiece.

Review By Sushil Chandra -
When a piece of literature is made into a film or a play, what is the yardstick of success? This has been an eternal question and many masters have fallen by wayside in this attempt. A filmmaker of Gurudatt’s caliber has failed to capture the essence of ‘Saheb Bibi Gulam’. In my view only two filmmakers have succeeded in the attempt_ Bimal Roy in ‘Devdas’ and Ray in ‘Shatranj Ke Khiladi’. My own yardstick is simple-whether the play or film is a simply a visual translation or it has been able to add additional depth, additional meaning or additional nuances to the original piece.
Watching Arvind Gaur’s rendering of ‘Lahron Ke Rajhans’ by Mohan Rakesh, I was looking for these additional chunks of depth, meaning or nuances and was positively surprised. The dark and unexplored recesses of human relationships have been brought alive with such stunning clarity; it leaves the viewer completely naked in front of the mirror. Though the storyline is timed in ancient Buddhist era, when Buddha returns to Kapilvastu after attaining Nirvana, the conflicts of various selves of men and women and the conflict of these conflicts with the external environment is eternal and probably more relevant in modern times and so the play is about modern people in modern times.
Coming to the original question, is this conflict of conflicts an added nuance not realized at the level of the book? The question can really be answered only by watching the play live. The complex conundrum of insecurity, narcissism, snobbery and paranoia portrayed by Sundari is rather difficult to grasp at the level of script without watching Shilpi Marwaha portraying it. Similarly the turbulence and the conflict of being torn between contradictory pulls and pressures felt by Nand can be realized only by watching Viren Basoya portraying it.
This was the third play by Arvind Gaur, which I have watched (after ‘Ansuni’ and ‘Ambedkar Aur Gandhi’) and I found both continuity and change in his style and technique. I have notice a tendency to use music and poetry to amplify the effect and the passion of an activist, which predictably was absent in this play as probably he saw no scope for them in this play. I feel, any musical or poetic interlude would have diluted the intensity of emotional interplay. In fact the play has been so tightly scripted by Rakesh, not a word can be added or removed. Where I could sense the continuity of style is the imaginative simplicity of stage layouting. In fact, while reading the play it is difficult to visualize that space can be used with such simplicity. I particularly find this simplistic use of stage space, the strongest point in Arvind’s plays. Probably the skill sets of street theatre are playing a major role here.
But, unquestionably, the aspect which adds depth to the play is the display of multidimensional pathos by Shilpi and Viren. At the risk of being personal, I must say, it is difficult to imagine actors at such young age, displaying such a deep understanding of human psyche.
Mohan Rakesh has been my favorite playwright, and this play has been least talked about compared to ‘Ashadh Ka Ek Din’ and ‘Adhe Adhure’. But I find it most fascinating because of its non judgmental study of human relationships. Fortunately, this presentation has been able to capture the complexity with amazing simplicity. This duality of simplicity and complexity is the hallmark of Arvind’s stagecraft.
___________________________________
Special thanks to- Smt.Anita Rakesh
and Dept of Buddhist Studies, University Of Delhi
Posted by Asmita Theatre Group at 11:25 AM