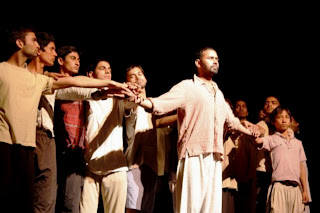 Unsuni - Unsuni is a socially relevant and politically deep script by Mallika Sarabhai, based on the Novel "Unheard Voices" by Harsh Mander. In a Society where the success of a handful makes bigger news than the misery of millions, a set of 5 monologues dares to speak out for the mute, the desolate, the chronically ignored... a woefully unloved India, full of People but starved of life.Unsuni lifts the veil around harsh realities faced by the diversity afflicted people of our country.
Street urchins abandoned by society to fend for themselves in the face of adversity; tribal people forced to surrender their honour to repacious land grabbers; scavengers and lepers who have never known the meaning of human dignity are some specific problems addressed by the play. The volatile nature of religious politics coupled with an incompetent judicial structure is also portrayed with grave honesty. In the depiction of all these causes is a common underlying plea for us to open our eyes to the bigger picture, to share that human worth which we for ourselves claim as a right, but deprive others of without justification.The play overall is an intense reminder of horrors towards which we voluntarily turn a deaf ear. It does not aim to downplay the success of those who do make it to the top, but is a call to the privileged to consider those who deserve equal rights, but lack equal opportunity

The Dil Se Campaign -
The Dil Se Campaign, was conceived as a collaboration of caring between governments and citizens, to secure the rights of the most vulnerable urban child. These children are forced to make the streets and railway platforms their home, and who earn by picking rags, begging or other street based work. Today Dil Se is a joint initiative between Aman Biradari, Center for Equity Studies, the Yusuf Meherally Center, and the Delhi Government Department of Education's Sarva Shiksha Abhiyan program. It aims at extending to these children comprehensive care in open residential homes (which we call Aman Ghars or Homes of Peace), based on their inherent and citizen-based rights to protection, food, education, health care, recreation, and love, including mainstream education, and in close integration with children who have families.

In the Dil Se campaign, we now have six Aman Ghars in Delhi and Hyderabad, with around 350 former street children in our comprehensive long-term care in Delhi alone. When Dil Se began its campaign four years ago, it did so without resources and without any buildings, only with a dream. Now, thanks to support from the Delhi Government and numerous other organizations, and the love, resilience, bravery, and talent of our children, we have come along way. We still have a great deal further to travel, but we will do it together.
Posted by Asmita Theatre Group at 11:04 AM