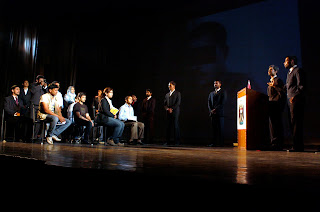 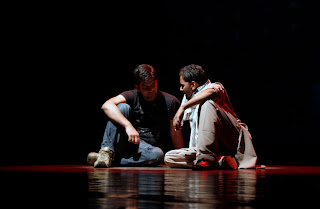 About The Play: The play explores facts of the gulf crisis and the US intervention which has been questioned by the civilized world time and again. The play is expected to attr...act the elite audience which is interested in global issues like this one. It explores emotions, talks about world peace and political orders of the day effect the common man.
For More Information Visit http://thelastsalute.com/

About Mahesh Bhatt:
Mahesh Bhatt (born on 20 September 1948), is a prominent Indian film director, producer and screenwriter. Bhatt's early directional career consisted of acclaimed films, such as Arth, Saaransh, Janam, Naam and Zakhm. He was later the writer of numerous commercial films in a range of film genres, from dramas like Hum Hain Rahi Pyar Ke and comedies like Duplicate, though he was mostly recognised for thrillers like Inteha, Jism, Murder and Woh Lamhe. Bhatt began his career as an assistant to Hindi director Raj Khosla. At age 21 he made his debut as a director, with the film Sakat (1970), this was followed by Manzilein Aur Bhi Hainin 1974. His 1979 film, Lahu Ke Do Rang, starring Shabana Azmi and Vinod Khanna, bagged two Filmfare Awards in 1980.Though his first major hit came with Arth (1982), when he turned to his personal life for inspiration. Later, he made many more films taking insights from his personal life, where he highlighted personal narratives, ranging from illegitimate birth to extramarital affair and created critically acclaimed films such as Janam (1985) and Naam (1986).A stand-out film from his earlier period is Saaransh (1984), an exploration of an old couple's anxieties in a universe governed by arbitrary violence, and dramatic films like Kaash (1987), which dealt with real-life family situations with a tragic end. In 1987 he turned producer, when he set up his own banner Vishesh Films, with his brother Mukesh Bhatt. He went on to become one of the most recognised film directors of the Indian film industry in the coming decade, giving both serious films like Daddy (1989), launching his daughter Pooja Bhatt as a film actress, and Swayam (1991); as well as commercial romantic hits like Awaargi (1990), Aashiqui (1990) and Dil Hai Ki Manta Nahin (1991), in which he cast his daughter Pooja with actor Aamir Khan. He next directed Sadak (1991) and won critical acclaim for the films Sir (1993), which saw Pooja Bhatt acting along with Naseeruddin Shah and Criminal (1994). In 1994 he won the National Film Award - Special Jury Award for his film,Hum Hain Rahi Pyar Ke (1993).In 1995 he moved to television, then a newly opening up medium in India. He made two TV series, the English language "A Mouthful of Sky" written by Ashok Banker and the popular Hindi language serial "Swabhimaan" scripted by writer Shobha De. Following this, he directed drama films like Dastak (1996), the debut film of actress Sushmita Sen, and Tamanna (1997), and tried his hand at comedy with Duplicate in 1998.His film, Zakhm (1998), was returned to the censor board because of right-wing pressure critical of its references to the Mumbai riots of 1993.His last film as director was Kartoos (1999). Thereafter, Bhatt retired a director, and took to screenwriting full-time, churning out stories and screenplays for over twenty films, many of which were box-office successes, like Dushman, Raaz, Murder (2004), Gangster (2006) and lastly Woh Lamhe (2006), based on the life of actress Parveen Babi, and on whom he has also scripted the 1982 film Arth.
Imran Zahid:
Imran Zahid is a theatre person and upcoming Bollywood actor, owns a media school in Delhi and has been extremely close to Mahesh Bhatt’s circle for many years. Zahid plays slain JNU student leader Chandrashekhar Prasad in the in Mahesh Bhatt next much talked about movie "CHANDU"

About Muntazer Al Zaidi:
Muntadhar al-Zaidi is an Iraqi broadcast journalist who served as a correspondent for Iraqi-owned, Egyptian-based Al-Bagh. As of February 2011, al-Zaidi works with a Lebanese TV channel. On November 16, 2007, al-Zaidi was kidnapped by unknown assailants in Baghdad. He was also previously twice arrested by the United States armed forces. On December 14, 2008, al-Zaidi shouted "This is a farewell kiss from the Iraqi people, you dog" and threw his shoes at then-U.S. president George W. Bush during a Baghdad press conference. Al-Zaidi suffered injuries as he was taken into custody and some sources said he was tortured during his initial detention. There were calls throughout the Middle East to place the shoes in an Iraqi museum,[4] but the shoes were later destroyed by American and Iraqi security forces. Al-Zaidi's shoeing inspired many similar incidents of political protest around the world.
Following the incident, Al-Zaidi was "embraced around the Arab world and was represented by the head of the Iraqi Bar Association at trial.On February 20, 2009, al-Zaidi received a 90-minute trial by the Central Criminal Court of Iraq.[On March 12, 2009, he was sentenced to three years in prison for assaulting a foreign head of state during an official visit. On April 7 the sentence was reduced to one year from three years. He was released on 15 September 2009 for good behavior, after serving nine months of the sentence. After his release, Al-Zaidi was treated for injuries and later said he planned to "build orphanages, a children's hospital, and medical and orthopedic centers offering free treatment and manned by Iraqi doctors and medical staff.
Posted by Asmita Theatre Group at 5:07 PM